Brand: TRM
|
Create your own review 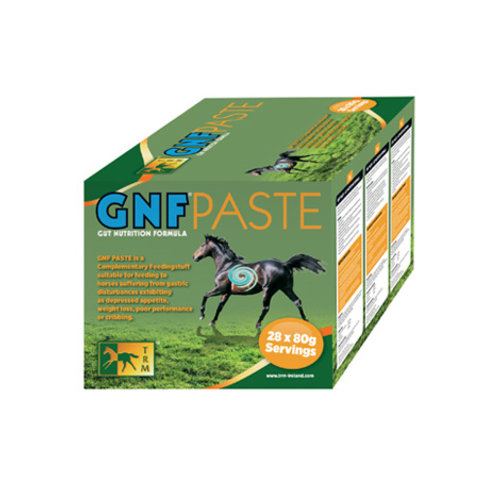 GNF Paste is a combination of minerals, amino acids and a prebiotic which have a role in general metabolism and are required for normal feed conversion. It should be used to complement the feedingstuff of horses. Feeding Instructions Feed two 80g servings per day for 14 days. (one 80g serving in the morning prior to feeding, and one 80g serving prior to the afternoon/evening feed). GNF Paste can also be fed for maintenance of a healthy digestive tract by feeding one 80g serving per day. (40g in the morning prior to feeding, and afternoon/evening feed). Alternatively as a maintenance nutritional adjunct feed 100g of GNF Pellets per day divided between the meals. Ingredient Analysis GNF contains both calcium and magnesium which are recognised as alkaline providers, and have been shown to increase intestinal mucosal integrity (Wang, 2000). Seaweed Extract (from Laminaria Hyperborea) Creates a floating raft of gel which helps to protect the non glandular part of the stomach from acid. Fructo-oligosaccharides (FOS) Classified as prebiotics (Mikkelsen and Jensen, 2004); substances that are recognised to stimulate growth of desirable bacteria (Kapiki et al., 2007), which can result in a positive symbiotic relationship between bacteria and host (Gibson and Roberfroid, 1995). Form a food substrate for the beneficial bacteria in the hind gut. Fructooligosaccharides can remain available as substrates for microbial populations to utilise, and thus promote increased intestinal efficiency. Glutamine An important amino acid for repair of epithelial cells. Glutamine supplementation has proven to increase intestinal performance (Yan and Qiu-Zhou, 2006), and has been found to decrease over-expression of pro-inflammatory genes, thus leading to a reduction in intestinal damage of rats receiving acetic acid supplementation (Fillmann et al., 2007). Threonine Is an essential amino acid and studies have shown that restriction of this nutrient may limit intestinal mucin synthesis and reduce gut barrier function (Hamard et al., 2007;Faure et al., 2005). Laminaria hyperborea Is a brown kelp or seaweed that has been found to be extremely palatable and provide increased digestible energy sources for sheep kept on the Orkney island of North Ronaldsay (Hansen et al., 2003). L. hyperborea contains higher amounts of vitamins, minerals and proteins, when compared to conventional vegetable sources (ibid.). Slippery Elm Rich in mucilage it will soothe inflammation internally. It is an easily assimilated food particularly in young foals and elderly horses. The action of slippery elm is gentle and will not harm the most sensitive of horses. The mucilage of slippery elm is a demulcent and emollient to the digestive system. A demulcent is an ingredient that is able to form a soothing layer over mucous membrane, gastric mucosa, and therefore provides a soothing action. A emollient soothes and softened by preventing water loss.