Navigation
Back to Home | Good As Gold Paste
Categories

Brand: TRM
|
Create your own review 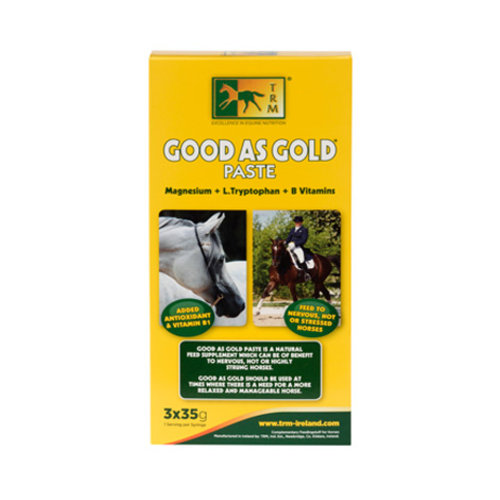 It contains a high level of Magnesium, which is in chelated form for better absorption; B vitamins which have important nutritional functions in the synthesis of neurotransmitters in the central nervous system; and L-Tryptophan, a precursor amino acid in the formation of serotonin. Feeding Instructions Feed 35g the morning before a competition. Where necessary also feed 35g the evening before a competition. All horses are different & dosage may need to be adjusted. Some horses react more to Magnesium supplementation, others to L-Tryptophan Key ingredients explained L-Tryptophan (available in both powder & paste) is the precursor of Serotonin, a neurotransmitter in the brain, which is deficient in depression, and naturally enhances sleep. Magnesium Under normal conditions, the majority of calcium is kept outside of the cell, where as magnesium is mostly found inside it. Stress responses vitally involve the influx of calcium into the cells, thus dramatically altering the cell magnesium to calcium ration. Calcium acts to encourage nerve excitation, adrenaline secretion and adrenaline response. The stress response subsides when magnesium is allowed to suppress all these factors so that they return to normal. B Vitamins Horses with B Vitamin deficiency may have a reduction in GABA neurotransmitters which have an inhibitory or calming effect.